The Vista area was originally inhabited the Luiseño Indians, who lived on the land until the founding of the San Luis Rey Mission in 1798. The prosperity of the mission-era declined by the 1830’s with the independence of Mexico from Spain. The Mexican government began to grant land ownerships to a variety of people, thus beginning the Rancho era of California. Three ranchos were granted in the Vista area: Rancho Guajome, Rancho Buena Vista, and Agua Hedionda Y los Manos.

The city incorporated on January 28, 1963 as a general law city with council/manager form of government. The first city council was elected and appointed Joe Fotheringham as Vista’s first mayor. The incorporated city limits contains approximately 19 square miles and in 1963 its population had reached over 19,000. In 1984, voters passed a law to elect future mayors, rather than through an appointment made by the elected council. By 2006, the population of Vista grew to over 94,000.

Today, Vista is a thriving community that continues to grow and develop many new activities and attractions. The Moonlight Amphitheatre, AVO Playhouse, and the Wave Waterpark are just some of the many cultural activities the city offers Vista residents. Vista's Business Park is home to over 800 companies, with many global businesses relocating their headquarters, manufacturing, distribution and marketing facilities to this business park. In addition, Vista Village has brought revitalization to the downtown with dining, entertainment, shopping, and public amenities.

In 1845, two Native Americans from the Mission San Luis Rey received the 2,200-acre Rancho Guajome as a land grant from the Mexican governor. They sold it to a Los Angeles merchant, who gave a half-interest in the rancho to his sister-in-law, Ysidora Bandini, as a wedding gift. Her husband, Cave Johnson Couts, was an Army lieutenant.

The ranch house at Rancho Guajome, originally named “Wah-hoe-mah” meaning “frog pond” in the Indian language, covered nearly 7,000 square feet and contained 28 rooms. Couts planted many orchards and vineyards and it is said he had the only orange grove in San Diego County for years, and one of the earliest irrigation systems.

Rancho Buena Vista is the best-preserved of the fabled land-grant ranchos. The original land grant was issued in 1845 by Governor Pio Pico to Felipe Subria, a Luiseño Indian and Christian convert. He later deeded it to his daughter Maria La Garcia Dunn for $1.00.

The property changed hands many times in the coming years, and was subsequently sold to Cave Couts for $3,000 in 1866. The combined ranchos of Rancho Guajome and Rancho Buena Vista became the center of social activities, with ranchers coming from all over the region to attend grand parties. Couts went on to buy much more land, at one time owning over 20,000 acres.

During the ensuing years, the Rancho was subjected to many boundary disputes and legal entanglements, which were eventually settled in favor of the Couts heirs. It was in 1886 that the Vista Land Company acquired a sizeable portion of land and the city was laid out.

In 1989, the City of Vista acquired the Rancho Buena Vista Adobe for the citizens of Vista. The Rancho Buena Vista Adobe is an historic treasure for the residents to share with the world and protect for further generations. Rancho Guajome, a rare surviving example of a 19th century Spanish-Mexican hacienda, is currently owned and operated by the San Diego Parks Department.

The third Rancho, Agua Hedionda Y los Monos, is a 2,600 acre ranch located in Shadowridge and the adjacent city of Carlsbad. A majority of this Rancho is developed for housing and commercial purposes, with a portion owned by the University of California as a preserve.

In the 1850’s the ranchos began to fade due to changing political conditions and the scarcity of water. 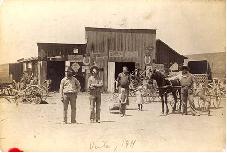 A growing number of settlers came to the area after California became a state in 1850 and began to create smaller agricultural holdings. One settler in the Vista area, John Frazier, applied to open the first post office and after several attempts to name the city (“Frazier’s Crossing” and “Buena Vista” were already taken), Frazier finally chose the name “Vista”. With the opening of the first post office in 1882, Vista had officially arrived.

Inhibited by the lack of water, Vista grew slowly in the early 1910’s to less than 1,000 people. Through the vote of the people in 1923, the Vista Irrigation District had the necessary funding to construct a new water supply from Lake Henshaw. New buildings in downtown sprang up almost immediately.

Agriculture began to flourish with crops such as tomatoes, celery, and citrus fruits. Some hillsides were also planted for avocados and by 1948, the City of Vista became the “avocado capital of the world.”

Free viewers are required for some of the attached documents.
They can be downloaded by clicking on the icons below.