During the winter of 1943 in Paris, two Frenchman - engineer Émile Gagnan and Naval Lieutenant Jacques Cousteau - developed the first “aqua-lung” demand regulator to make filming and exploring underwater easier. Little did they know that their work and innovative scuba diving equipment would forever change and enhance underwater exploration.

In 1946, the two explorers launched a company called La Spirotechnique to sell their underwater regulators, which became a big commercial success. Today, that same company, now Vista-based Aqua Lung, continues to be a leading global designer and manufacturer of scuba diving equipment and water sports gear. The innovative company makes products for swimming, snorkeling, scuba diving, military, and professional users and sells in over 120 countries worldwide. Aqua Lung also provides products for Navy SEALs, all branches of the military and Coast Guard, and public safety, aviators, fire and police departments across the globe, in addition to making learn-to-swim products for children and adults. 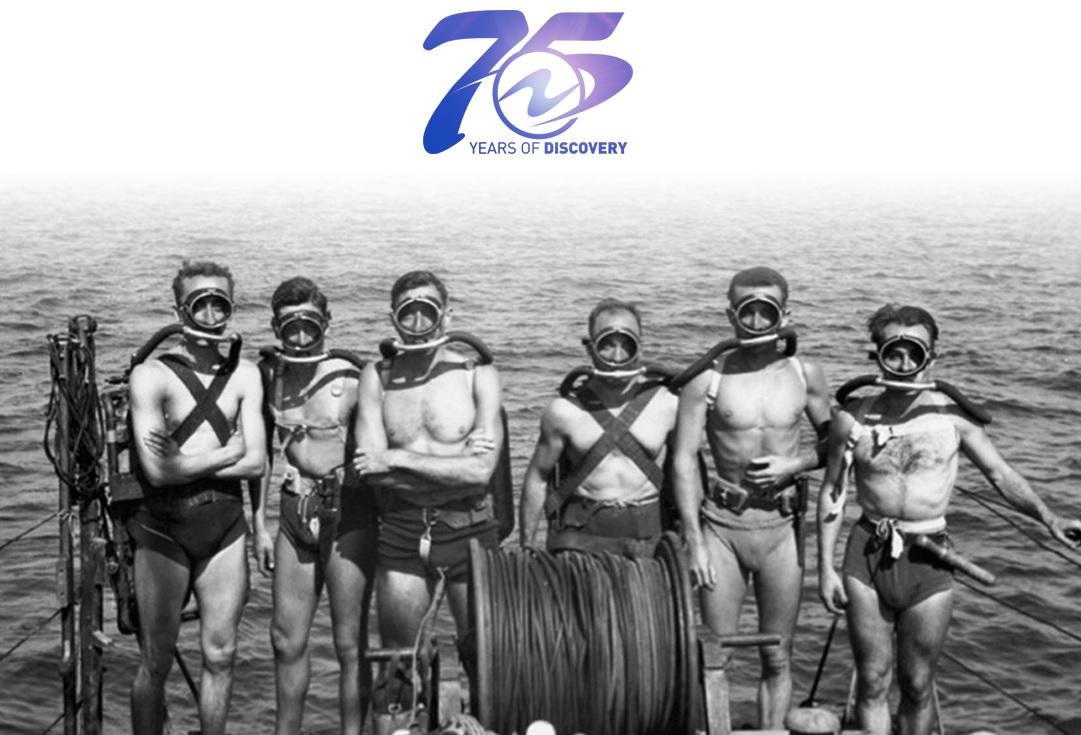 “As an ocean-minded company, we chose to be based in the San Diego area, specifically in Vista, due to the climate, proximity to the sea, and friendly business environment,” said Michael Ladinig, Aqua Lung’s Senior Global Brand Marketing Manager. “It is very important for us as a lifestyle and activity-based business to have our operations where people who are passionate about what we do can live and thrive.” 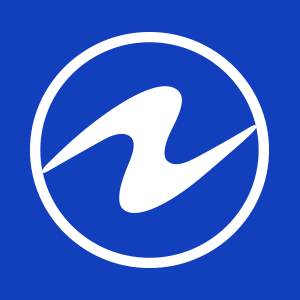 It seems Aqua Lung’s more than 150 employees are also happy being based in Vista.

“As a company that has been in business for over 75 years, we are happy to have steady growth and a stable business with passionate local employees, some of whom have been with us for more than 25 years,” Ladinig said.

Vista is home to a host of other sports manufacturing and wellness companies - from surf wax to premier BMX bikes, speciality hot tubs and more - who cite easy access to the ocean, mountains, and deserts, along with year-round beautiful weather and a business-friendly environment as the reason they call this diverse city home.


In fact, the action sports and fitness industry along the 78 Corridor - including Vista - was responsible for 7,161 jobs (79% above the national average) in 2018, according to the San Diego Regional EDC. The average annual salary of these workers was $63,990, compared to the national average of $35,402.

Another sports manufacturer that is happy to call Vista home is Wax Research, maker of the popular Sticky Bumps surf wax.

“Our family has a long history in the city of Vista, dating back to 1927 when my wife’s grandfather owned an avocado ranch. The family also owned two clothing stores in Vista from 1950 to 1969 - Ober’s Menswear and Alma Fashions,” said John Dahl, President of Wax Research, a family-owned business. “Also, presently our CEO (Ryan Dahl) is a fourth-generation Vistan doing business in the city. We as a family are very proud of this legacy.”

The company, which was founded in 1971, has also created a legacy of its own in the surf industry. In 1992, Dahl formulated a new surf wax using the additive calcium carbonate and called it Sticky Bumps. This new formula became the template for all modern surfboard waxes. The company now manufactures 20,000 bars of Sticky Bumps daily in its Vista facility. 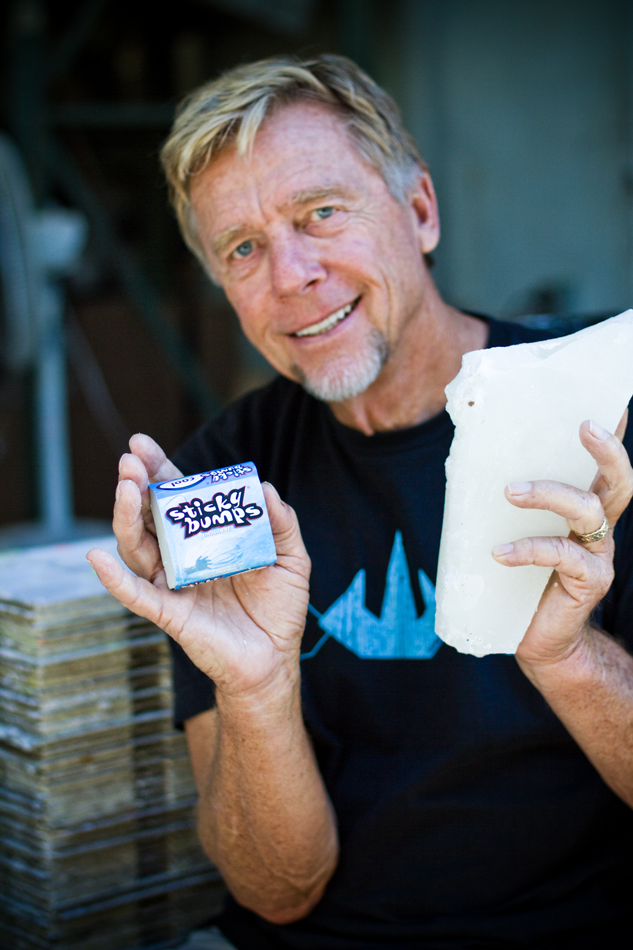 The Wax Research factory has been located in a few other North County cities, settling in Vista in 2013. “To date, Vista has been the most business interactive city with visits to our facility by both the Mayor and City Council members,” said Dahl, who began his surf accessory career in 1968. “We plan to stay in Vista.”

Wax Research, which has 20 employees, has 55 distributors worldwide including West and East Europe and Mediterranean, Middle East, Asia, Austral Asia, South and Central America, South Pacific, Africa, Canada, and the U.S. Dahl said the company has remained competitive in the industry via a combo of customer service, innovation, and production capability as well as a strong social media presence worldwide.

The company has experienced its largest growth in its WEND snow and bike products, which, Dahl said, is poised for 20% growth in 2019. WEND includes a line of Meadowfoam waxes, including racing waxes, overlays, performance bars, pastes, and a full range of tuning shop waxes. The firm’s Meadowfoam Cleaner/Conditioner is also the leader in the cleaning and conditioning categories.

“These proprietary formulas are the result of extensive testing around the globe and in different snow types while working with a laboratory that has over 40 years of experience in developing performance snow wax for the world’s top ski and snowboard athletes,” Dahl said.

Less than a mile away, the folks at Haro Bikes have carved a deep niche in the BMX industry. The company was founded in 1978 by the father of BMX freestyle Bob Haro, who created the world’s first BMX/freestyle specific frame and fork. Freestyle would go on to become the largest segment in the specialty BMX category and remains that way today.

Haro sold his interest in the company in the late 1980’s, staying as a consultant until early 1990’s. Haro, who now owns and operates Cardiff-based Haro Design, a performance branding and design firm, still collaborates on projects with Haro Bikes.

In 1993, Haro Bikes was sold again and established its headquarters in Carlsbad. “This would later prove to be problematic, as the golf industry was exploding in growth and the location of those companies were right where we were. Ultimately, the demand on space would drive up rents, and our decision was to buy or build our own building and that decision led us to cross the canyon and build in Vista,” said Joe Hawk, the company’s COO. “The City of Vista has knocked on our door and thanked us for being here.”

Since Haro Bikes relocated to Vista, the city has become a cycling and outdoor industry hot bed, Hawk said. “The largest BMX company (Haro) is based here, the largest lifestyle company was based here prior to its acquisition (Electra), and Canari and others are also based in Vista.” 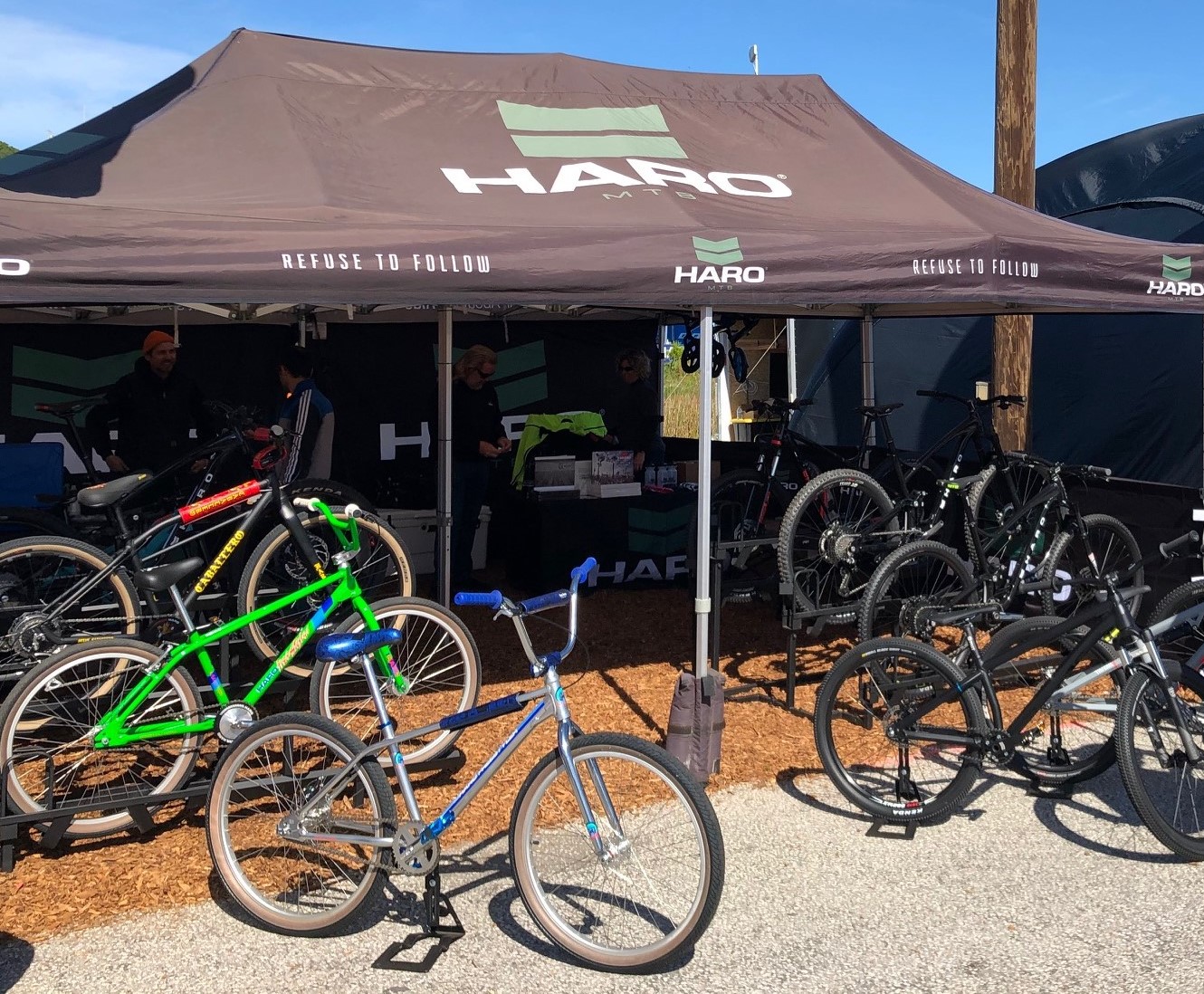 Besides BMX, Haro - which has about 25 employees in Vista -  has expanded its products to include mountain bikes, road bikes, kids bikes, beach cruisers and, electric bikes.  “While BMX is our core strength, we had to become a complete company in order to grow our business and become more important to our customers worldwide,” Hawk said.

Haro Bikes are sold in more than 80 countries around the globe. In the U.S., 97% of the company’s bicycles are sold to specialty retailers which include bicycle dealers, high end sporting goods, and mail order.  Haro operates in the specialty bicycle market, which is generally 25% of the total market in units, with mass merchants (Walmart, Target, etc.) representing the other 75%, Hawk said, adding that Haro has averaged 5% growth over the past five years in a market that has not grown. 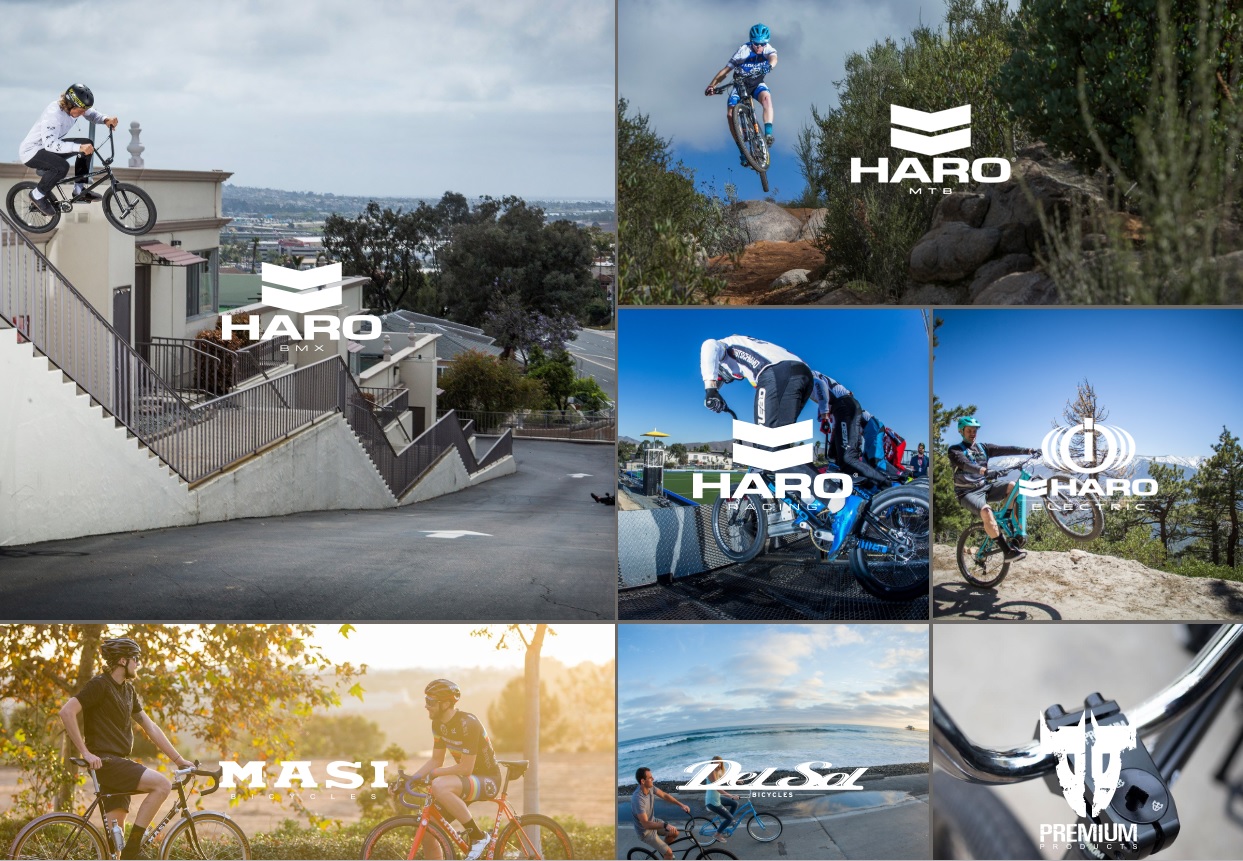 “Operating out of the city of Vista gives us the opportunity to remain focused on the one thing that will make us successful in our efforts, and that’s our customer.  We aren’t going anywhere, except forward,” he said.

Award-winning hot tub manufacturer Watkins Wellness has also experienced success and growth in Vista. In fact, the company has had double-digit percentage growth over the past five years, according to Executive Vice President Mike Dunn.  “During a time when general economic conditions would be characterized as low growth, Watkins Wellness has gained market share by providing high-quality, innovative products and exceptional customer experiences before, during, and after purchase,” he said.

Watkins Wellness opened its corporate headquarters and manufacturing facility in Vista in January 1990 after it outgrew its footprint in a nearby city.  “The decision to locate in Vista was based on the availability of a large parcel of land we occupy and its proximity to our existing workforce,” Dunn said. “Over our nearly 30-year history in Vista, we have developed a friendly, positive relationship with the city.”

The company was originally founded in 1977 as Watkins Manufacturing Corporation by Jon and Jeff Watkins. The company - which also now sells aquatic fitness product Endless Pools® - was rebranded Watkins Wellness in 2016. 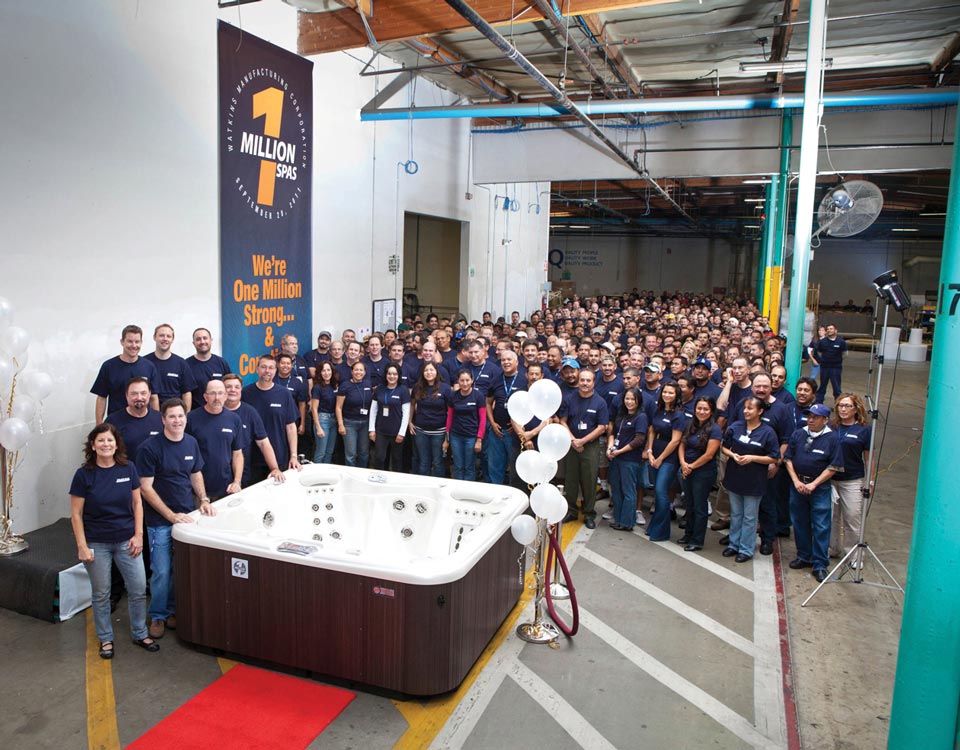 Watkins Wellness, which has 650 employees in Vista and over 2,400

globally, sells its products through a worldwide network of approximately 1,300 professional retailers in more than 70 countries. The company’s products are also available online through mass merchant retailers. Some products are even provided on a direct-to-consumer basis.

Watkins Wellness was named one of San Diego's Best and Brightest in Wellness at an awards presentation, which was held at SONY’s world headquarters in late February. The Best and Brightest in Wellness is an innovative nationwide initiative that recognizes and celebrates quality and excellence in health awareness around the country.  This award acknowledges organizations that promote a culture of wellness and implement wellness initiatives in an effort to make their business and the community a healthier place to live and work. 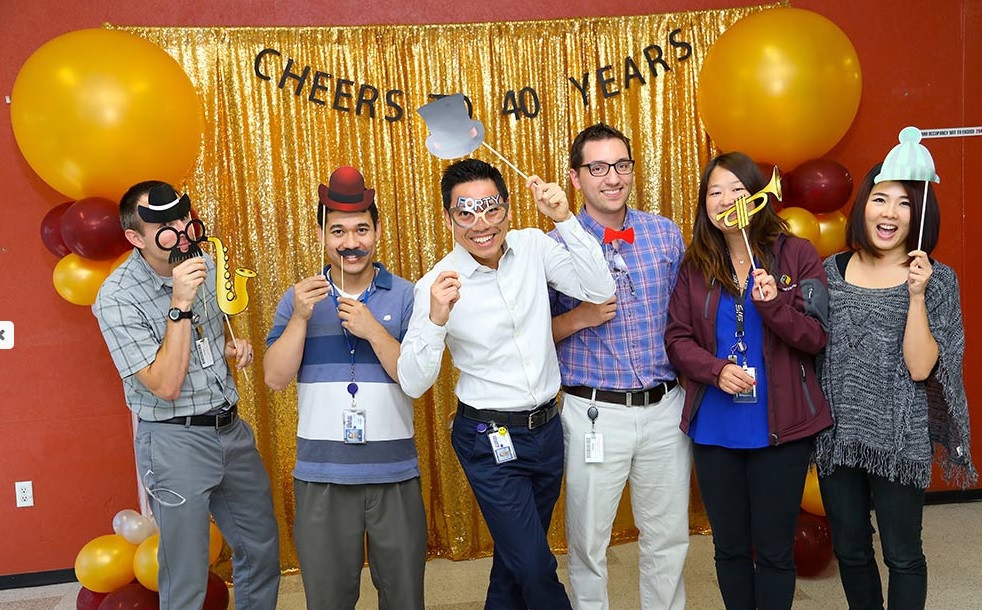 A company that plays together… stays together.  Watkins Wellness promotes health & wellness among its employees, as well as frequent company gatherings.

“Watkins Wellness’ products are designed to help people improve their lives,” Dunn said. “Our tagline for Watkins Wellness is Feel Good. Live Well.® This is our mission, and all we do in developing products is focused on the consumer and achieving what we believe to be a noble cause. Our aim is to see people make our products part of their daily routine, not only to help with aches and pains, but also to recover from or to be able to participate in their favorite activities that they might not otherwise do without the benefits of hot tubs and fitness systems.” 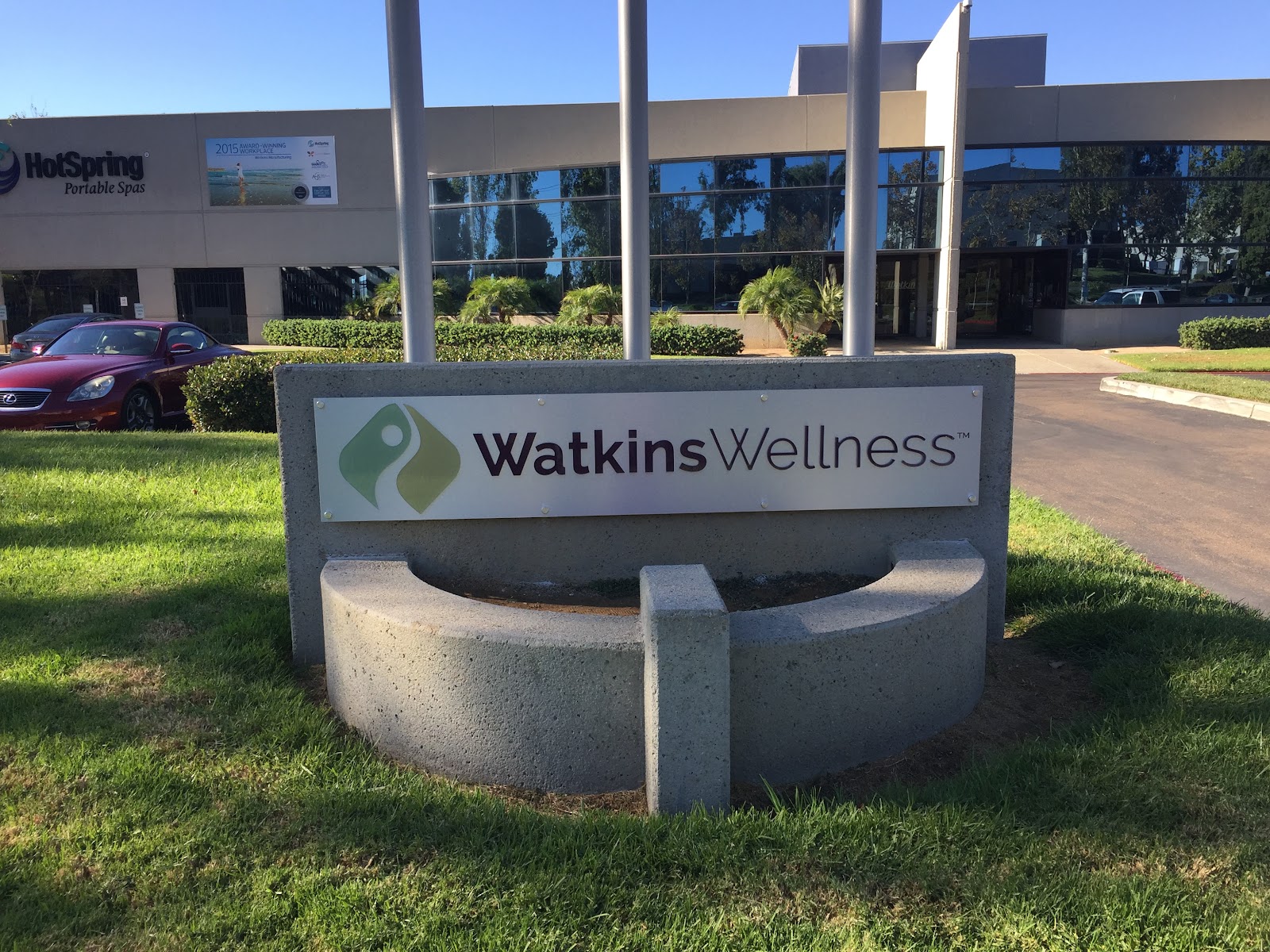 Other notable sports manufacturers and wellness companies based in Vista include:

Earthlite: Founded in 1987, award-winning Earthlite is known as the leading massage and spa equipment manufacturer in the world.

Toe Sox: Makes unique five-toe socks and legwarmers for all sorts of uses, including yoga, ballet and pilates.