A growing interest in walkable and live-work-play urban experiences are breathing new life into downtowns across the country.

In the City of Vista, California, urban sprawl and economic shifts are also reshaping its downtown as city leaders are putting strategies in place to make downtown more inviting while capitalizing on its civic, cultural, historical, and entertainment assets to further support the vibrant environment needed for a thriving city center.

Historic downtown Vista - which used to handle traffic back in the day from old Highway 395 - has undergone several improvements since the 1990s, including the modification of Broadway to make it more pedestrian friendly, the modification of Main Street to two lanes with meandering sidewalks instead of a major four-lane transportation corridor, and in more recent years, the addition of Vista Village Drive, additional parking lots, decorative lighting, landscaping, and historic wayfinding signs. Significant investments that Vista has made to the sidewalks, streets, parking, lighting, landscaping, and signing in the downtown area over the past 30 years totals about $12 million.

In 2015, the City of Vista mapped out a Downtown Vista specific plan for the continued revitalization of downtown, reestablishing it as Vista' s commercial, social, and cultural center.  The purpose of the plan is to create a vibrant, attractive, and livable downtown for existing and prospective residents, businesses, and visitors.

“Our vision for downtown Vista is an active, prosperous, and culturally rich city center that attracts both residents and visitors,” said Mayor Judy Ritter. “We envision downtown as a place that provides abundant opportunities to socialize, shop, dine, conduct business, enjoy a variety of events and be enriched and entertained by art.”

Downtown Vista’s renaissance is greatly due to the city’s amplified efforts to attract diverse businesses and investors to the area over the past few years. One of them is Shaks Mediterranean Bistro, which opened in Vista in the fall of 2018 after closing its Armenian Café in Carlsbad due to the purchase and opening of a new hotel.

“Upon losing our location in Carlsbad, we began looking for locations in all of the immediate areas. The City of Vista was very persistent in assisting us to find a location. With their help, and after looking at many locations in Vista, we chose Main Street,” said owner Eddy Shakarjian, also a long-time Vista resident. “I can’t say enough about the city personnel, starting with Kevin Ham and his staff, and John Conley and his staff. They all made the load much easier for us and I was blown away with their kindness.”

“We love downtown Vista,” Shakarjian added. “I have lived in Vista since 1994, before the existence of Vista Village Drive. Main Street was my only way to go home from Carlsbad. I wished for many years for the city to revitalize this area and now it’s happening. We wanted to be part of this revitalization.” 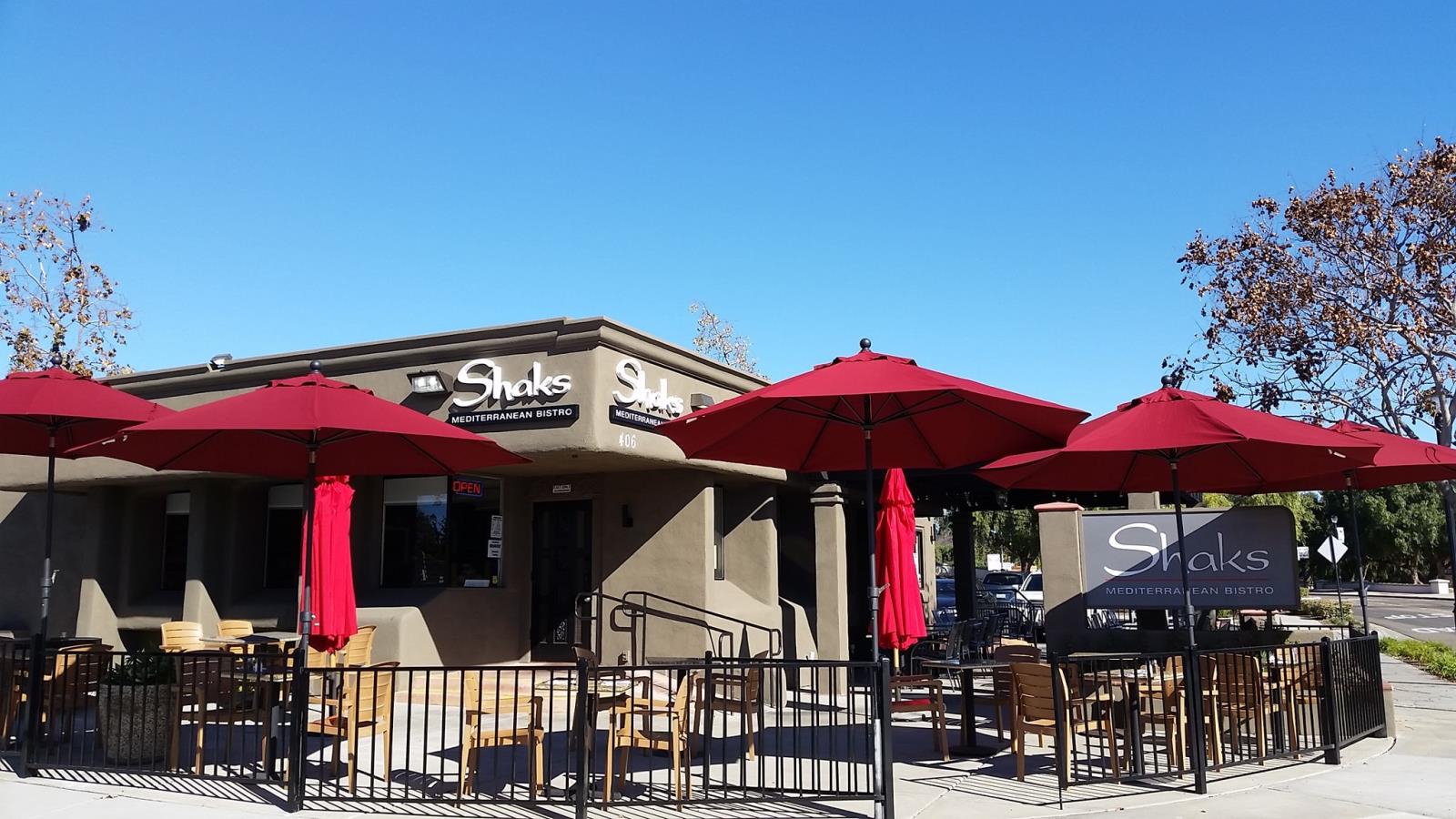 Shaks Mediterranean Bistro attracts patrons from around the county

As a business owner and resident, Shakarjian said he and his family are excited about historic downtown Vista’s growth. In fact, he said he has seen increased foot traffic downtown since opening his restaurant.

“We are impressed with all the support from all the locals,” he said. “The bonus is all my customers from other communities such as Rancho Santa Fe, Encinitas, Carlsbad, Del Mar, and La Jolla continue to visit our restaurant, and they are all enjoying seeing the growth in Downtown Vista as well. It’s a win-win situation for us and the city, as well as for other merchants our customers are visiting.”

A couple of blocks away on Broadway, Belching Beaver Tavern & Grill, which opened its doors in 2016, is also attracting more visitors downtown and adding to the city’s thriving brewery and restaurant scene.  Belching Beaver, one of a handful of breweries in downtown Vista, opened the Broadway location after experiencing success with its tap room in Vista’s Business Park.

“When we opened our place in the industrial park, we found the City of Vista really easy to work with,” said Belching Beaver’s co-founder Tom Vogel. “Every now and again one of the city staff would call and ask if we would like to expand to downtown, so we kept our eyes open. One day, I found out the bank building was coming up for sale. I thought it was the perfect spot; Vista was starting to develop S. Santa Fe Avenue, and the western part had already modernized. I loved the feel of the older downtown. I immediately emailed Kevin Ham, who set me up with the bank owners. I had worked just up the road in the early 90’s and knew the area well. I think it's great we turned a 50-year-old bank into a community beer garden and tavern.”

Belching Beaver and its 58 employees have settled right into downtown. The 10,000 square foot tavern, which includes two outdoor patios is currently adding more brew tanks, an outdoor lounge area with a fire pit on the front patio, a green wall inside, and sand to the back patio. Besides buying the old bank building, Belching Beaver has invested about $1.3 million so far on its downtown tavern and grill.

As for the revitalization of downtown, Vogel is happy that his business has been part of that. “Vista is starting to open up to bringing more life in terms of music to downtown,” he said. “I hope that continues. The old downtown area can really use some entertainment.  I would love to see some jazz clubs move in, but I am told by my co-workers that’s just because I am old. They may be right, but there is nothing like kicking back to good music with a great beer or glass of wine.”

Another local business owner thrilled about the rebirth of downtown Vista is Julie Lowen. Lowen owns the First National Bank Building on Main Street, which currently serves as the headquarters and staff training center for her company, Children’s Paradise Inc., which delivers high-quality early childhood education to more than 1,000 children and families across North San Diego County daily.

The bank building has special meaning to Lowen - it’s where her parents got a loan to purchase their home on Maryland Drive in Vista. That moment was significant considering Lowen and her family were homeless when they first moved to Vista in the early 1970s.

“My father had been laid off by Boeing in the late 60’s/early 70’s and had struggled to feed our family of nine extensively until we were forced to abandon our home in Washington State,” she said. “My father had learned to finish cement while working as a minimum wage laborer for Weyerhaeuser Inc. He decided to move to Vista to work with his relatives as they were more established in the construction industry. My father was not licensed, so he worked odd laborer jobs as we all lived in a VW bus/travel-trailer or stayed with my aunt and uncle.”

Lowen and her family then lived with a family from their church for several months until they saved money and stabilized their income before getting a loan at the bank to purchase their own home.

Today, Lowen has more grand plans for the special building, which she is currently developing. “We are determined to create a jewel in the heart of Vista with our development,” she said. “We have some innovative ideas, which will require a bit of work to refine.” 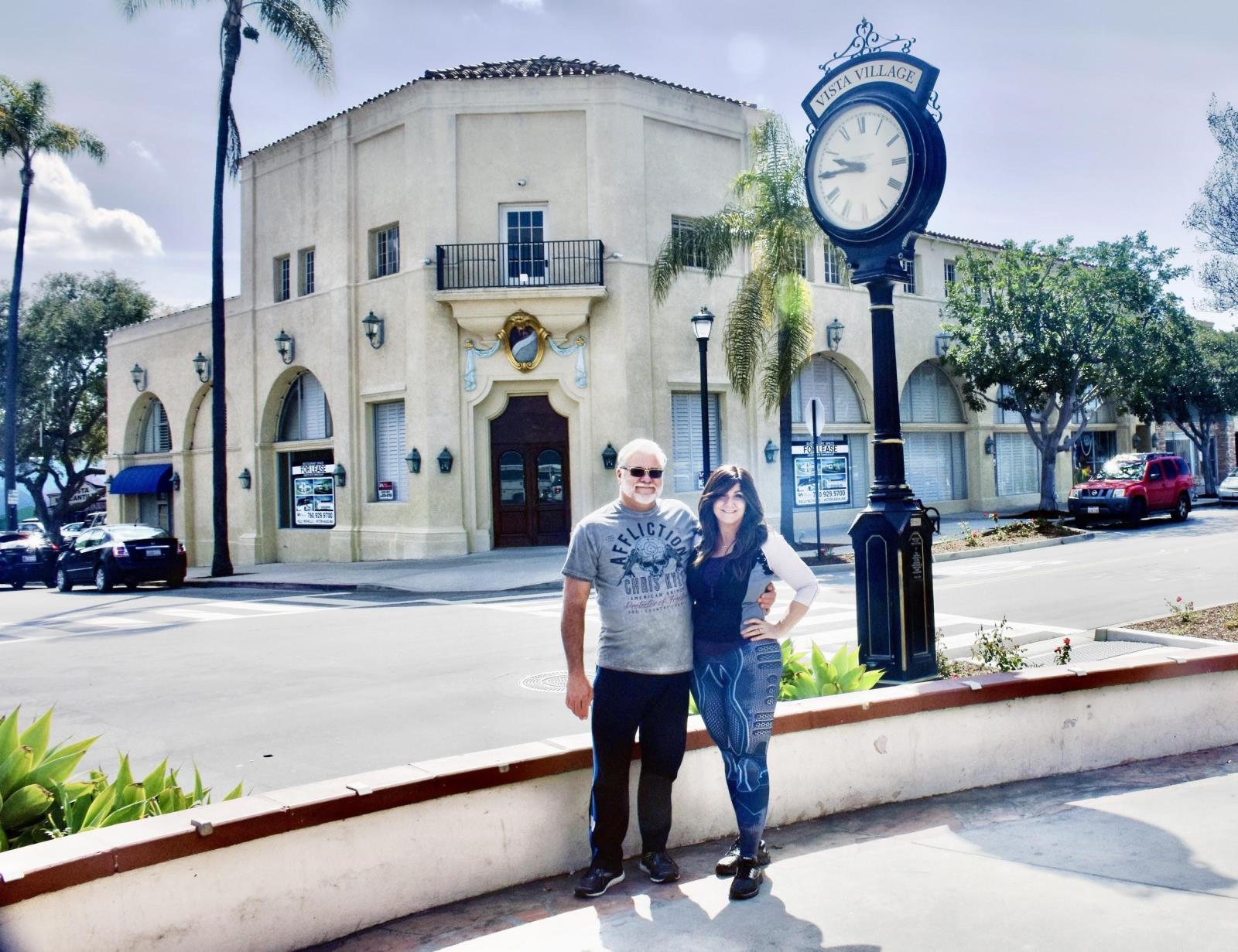 Julie & Dave Lowen in front of their building

Meanwhile, Lowen said the growth downtown has been pretty exciting. “There have been so many new developments just completed, underway, or proposed and in the planning phase. New businesses will also add more variety and activities, which will be sure to create a better regional destination. I am excited because the city staff and council are engaged and working to develop a cohesive plan. It just takes teamwork amongst businesses downtown to see this area explode with activity.”

Editor’s Note: This is part 1 in a series about the City of Vista’s revitalization efforts to create a vibrant, attractive, and livable downtown for existing and prospective residents, businesses, and visitors. Read part 2 here.