On a recent cool summer evening, the city-owned Moonlight Amphitheatre, located in Vista was all abuzz with patrons gearing up for a fun, nearly sold-out performance of Mel Brooks’ The Producers.  Some show-goers were finishing up dinner at the outdoor venue’s Luna Cafe (run by Kitchens for Good), while others were picnicking on the lawn.  The high-caliber acting and live orchestra kept everyone glued to the stage.

This was a typical night for the Moonlight, which is known for its Broadway-quality shows and attracts people from all over Southern California.  It’s no wonder it was voted San Diego’s #1 outdoor theater by readers of San Diego Magazine in 2009.

Besides bringing in repeat patrons year after year, the Moonlight Amphitheatre also serves as an economic engine that moves throughout the city - from nearby hotels to restaurants, shops, markets, and breweries.

“Patrons and performers sleep in our hotels and eat in our restaurants, which helps lift the brand of Vista,” said Judy Ritter, Mayor of Vista.  “Having an award-winning venue and award-winning productions demonstrates that Vista is a high-quality place to live, work, and play.”

In this vibrant North County city, the beloved Moonlight Amphitheatre is a shared community vision for an outdoor venue suitable for the whole family and is helping to establish Vista as an outdoor recreation destination.

“Quality recreation and entertainment venues play a vital role in a community’s economic development,” said Kevin Ham, the City’s Director of Economic Development.  “Having a world-class amphitheatre not only provides a quality of life for our residents, but it also attracts visitors and businesses seeking locations with rich cultural experiences.”

Access to amenities and cultural activities have increasingly risen to the top of the list for many companies, according to this study.  In fact, the study reveals that 76 percent of corporate executives identify quality of life factors as “very important” or “important” in their site-location decisions.

In the case of the Moonlight Amphitheatre, the venue has also attracted support from local companies who see its value to the community at large. For example, Vista-based organic soap maker Dr. Bronner’s renewed its sponsorship partnership for 2019 in support of cultural arts programming at the Moonlight.  With a $100,000 gift of support, Dr. Bronner’s is the title sponsor of the Moonlight Presents series as well as the Visionary Sponsor of the Amphitheatre’s summer season of musicals. Through this sponsorship, Moonlight provides hundreds of tickets annually to events to the Boys and Girls Clubs of Vista and Oceanside.

The city-run Moonlight Amphitheatre was first created in 1976 as a flag pavilion.  The once small stage would eventually support musicals jointly produced by the City and the Vista Unified School District from 1981 to 1983.  In 1984, the "Vista Summer Theatre Festival" was brought under the umbrella of the city, and the theatre was renamed Moonlight Amphitheatre. In 2009, Moonlight received a much-needed $13 million renovation which was funded by revenues from a voter-approved proposition to raise the city sales tax and the Moonlight Cultural Foundation.  Read more of the Amphitheatre’s history here. 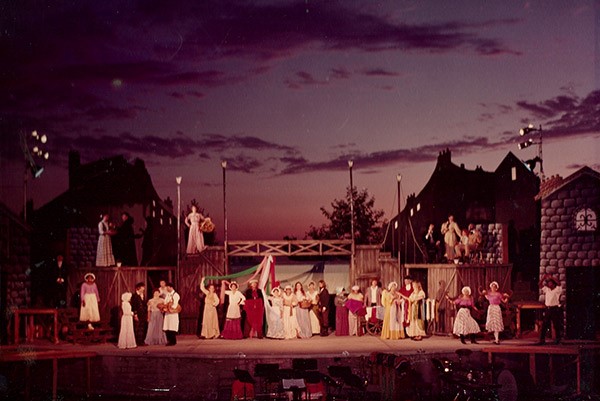 The Moonlight Amphitheatre's inaugural production of Oliver in 1981.

Today, Moonlight Amphitheater, which operates as Moonlight Stage Productions, is recognized as one of San Diego County's major theaters, and is critically acclaimed for its Broadway-quality musicals.  Led by Producing Artistic Director Steven Glaudini and Managing Director Colleen Kollar Smith, the Moonlight - which celebrates its 40th season in 2020 - has experienced “an exciting period of audience growth and artistic vigor.”

Nestled on a hillside in Vista’s Brengle Terrace Park, Moonlight - which is currently in the midst of its summer season - provides year-round entertainment.  Besides presenting Broadway musicals during the summer, the Amphitheatre hosts concerts and other great entertainment all year long.  From January through March, Moonlight closes its stage door and is transformed into ClubM, a cabaret supper club.

The Moonlight has become a gathering place for many locals, including those who help run the venue.  Colleen Smith, Managing Director of Moonlight Stage Productions for the City of Vista, harkens back 31 years ago when she performed for the first time on stage at the Amphitheatre through the Moonlight youth program.

“Many of the folks in leadership positions here have similar stories tying us to the theatre before having careers elsewhere and coming back,” she said. “It is a special place that tends to bring people back whether for a show or a longer-term position.”

Smith said Moonlight has experienced tremendous growth in the past five years.  “Our Producing Artistic Director programs the summer season with something for everyone, always offering a family show, contemporary musicals (often regional premieres), and something with a classical feel,” she said.  “We have seen our subscriptions grow year-to-year as well as increased fundraising from the Moonlight Cultural Foundation.”

Historically, the Moonlight Cultural Foundation provides between $200,000 and $650,000 in support for Moonlight Stage Productions.  These funds are used to cover the cost of the Broadway-caliber productions and marketing each production throughout the year.

Smith said support from city leaders has also been critical to the Amphitheatre’s success.

“We are privileged to have leadership who believe in the arts and the significant impact they have on a community,” she said.  “We are the Cultural Arts program of the City of Vista, so without that support, we would not exist. Additionally, we rely on all of the various city departments who work with us to make our work come to fruition.  Theatre is the most collaborative of art forms, and it takes everyone from the director of a show to the director of the human resources department. We also rely on the Moonlight Cultural Foundation who is our fundraising partner to raise support for our work.”

“We are also incredibly proud to have a loyal subscriber base that continues to grow, and because of the additional support we receive from the city, the percentage for which our programs require a subsidy is significantly lower than theatres of our size across the nation,” she added.

Those patrons also spend money in Vista restaurants, markets, and other local shops.

“We have conducted informal surveys and discovered that patrons tend to make an evening at the theatre a special night out and either go out to dinner ahead of time, pick up food at a local restaurant and bring it in, or shop at a local grocery store and bring that to the theatre,” Smith said.  “The survey showed the majority of people spend $20 to $40 in addition to what they paid to come to the theatre. We also employ over 100 people during the summer months on stage, in our orchestra, backstage, in our box office, etc... We are often the first job for many young people, and are proud to provide that first step on their career path.”

Once people come to the Amphitheatre, they often return, Smith said, adding that regulars come from all over San Diego and Orange County.  “Our single ticket holders come from everywhere you can imagine. We are proud to be a destination where people can count on a lovely night out and a top-notch live performing arts event.”

The arts, unlike most industries, leverage significant amounts of event-related spending by their audiences.  According to this report, the typical arts attendee spends $31.47 per person, per event, beyond the cost of admission.  Nationally, total event-related spending was an estimated $102.5 billion during 2015. This spending supported 2.3 million jobs, provided $46.6 billion in household income, and generated $15.7 billion in total government revenue.

One Vista business that reaps the benefits of the Moonlight Amphitheatre is Frazier Farms.  The family-owned market typically sees an increase in grab-and-go options and deli sales on nights the Moonlight Amphitheater has performances, said Vice President Matthew Frazier.  Popular items, he said, are sandwiches, sushi, salads, soups, salad bar, and quick and easy grab-and-go options prepared by the market’s kitchen.

For Frazier, whose grandfather Bill started Frazier Farms in 1971, the Moonlight Amphitheatre is a jewel in the community.

That’s music to Justin Jorgensen Vierela’s ears.  Vierela, who is in his second season as Director of Development for the Moonlight Cultural Foundation, said support from local residents is critical to the Amphitheatre’s success.

“The Moonlight’s impact goes far beyond those who are lucky enough to work behind the scenes.  On the other side of the curtain, our Moonlight patrons have made the theatre part of their yearly traditions and cultural life,” said Vierela, whose first job at 16 was backstage at the Amphitheatre during the summer.  “For many in our community, the Moonlight was their first exposure to the performing arts (I can for sure say it was mine). The theatre has become a shining gem in the cultural landscape of our community.” 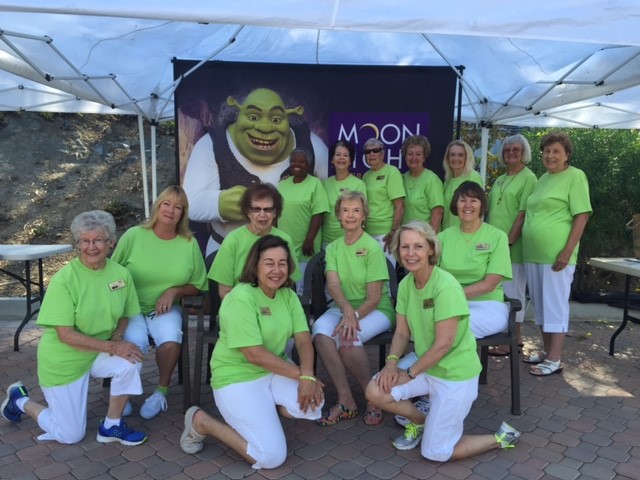 The Moonlight Cultural Foundation also operates the Moonlight Youth Theatre, a program that serves over 400 youth from Temecula to Chula Vista with three productions, summer camps, and internship programs. Moonlight Youth Theatre's Internship Program is the only one of its kind in our region.  Through the program, interns learn about the tools needed to move forward in a chosen technical field - observing, training, and collaborating with dedicated professionals at an award-winning theatre organization and gaining invaluable experience, building a resume, making connections and having the opportunity to gain community service hours, which are vital for college applications.

“We look forward to continuing to provide access to the arts for every member of our community,” Vierela said.